Open letter to the EU Heads of State and Government 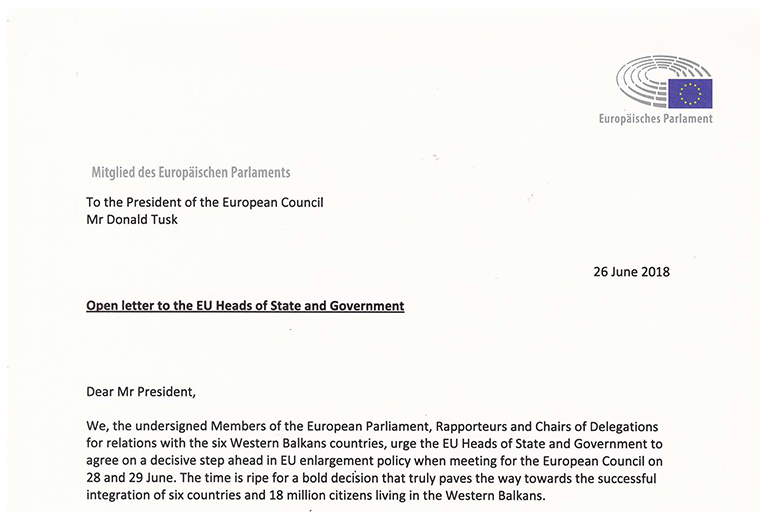 To the President of the European Council, Mr Donald Tusk

Open letter to the EU Heads of State and Government

Dear Mr President, We, the undersigned Members of the European Parliament, Rapporteurs and Chairs of Delegations for relations with the six Western Balkans countries, urge the EU Heads of State and Government to agree on a decisive step ahead in EU enlargement policy when meeting for the European Council on 28 and 29 June. The time is ripe for a bold decision that truly paves the way towards the successful integration of six countries and 18 million citizens living in the Western Balkans.

Signed on the shores of Lake Prespa only a few days ago, the agreement between the governments of Greece and the Former Yugoslav Republic of Macedonia to settle their differences on the name issue opens an exciting opportunity for Europe: to contribute in the implementation of this agreement and to bring one more Western Balkan country into the fold of the Union- and, by doing so, sow the seeds of peace and prosperity for the whole south-east Europe.

This choice for a life in peace and prosperity, governed by the rule of law and by effective democratic institutions, unites the citizens from all six nations on the Western Balkans: Albania, Bosnia and Herzegovina, Kosovo, North Macedonia, Montenegro and Serbia.

A generation of young Albanians, Bosnians and Herzegovinians, Kosovars, Macedonians, Montenegrins and Serbs has grown up with the depressing outlook that bilateral disputes, the bitter memories of wars they had no part in and maliciously abused versions of history would infinitely define their relationship with their European neighbours and prevent their nations from building up their societies and democratic institutions. With good will, the necessary determination and a clear political view, this dreary outlook might soon be a thing of the past.

This is why we call on the Heads of State and Government of the European Union to grasp this once-in-a-lifetime opportunity. The people of the Western Balkans need a clear sign that the Union is supporting their efforts to build modern states, with strong and independent institutions, viable economies and solidary societies. Several regional and global powers have a political and financial interest in thwarting the European ambitions of all six Western Balkan partners. This must not happen. The forces of discordshall not prevail.

We urge the European leaders to demonstrate their clear commitment to the European perspective of the whole region, agreeing upon the opening of accession negotiations with Skopje and Tirana at the upcoming European Council on June 28th and 29th. ln the ongoing accession negotiations with Montenegro and Serbia, new chapters should be opened. Visa liberalisation for Kosovo should be implemented. The reform efforts of Bosnia-Herzegovina should be rewarded, depending on the outcome and aftermath of the general elections on October 7th. The EU must remain a reliable partner because the conditions for steps ahead have been fulfilled, as the European Commission and the European Parliament pointed out.

The future of the Western Balkans lies in the European Union, in the rule of law, liberal democracy, social justice and the innovative vigour of an open society. The thorough and ambitious negotiations on the way to the EU membership offer the strongest possible guarantee that the citizens of the six nations will in the not-too-distant future enjoy these benefits. Europe must not disappoint them.

Dear Mr President, we would be grateful if you could pass this message to all EU Heads of State and Government. We also intend to publish this Ietter as an open letter.

Eduard Kukan, Chair of the Delegation to the EU-Serbia Stabilisation and Association Parliamentary Committee (EPP, Slovakia)

Monica Macovei, Chair of the Delegation to the EU-Aibania Stabilisation and Association Parliamentary Committee (ECR, Romania)

Tonino Picula, Chair of the Delegation for relations with Bosnia-Herzegovina and Kosovo (S&D, Croatia)

Federica Mogherini, High Representative of the Union for Foreign Affairs and Security Policy